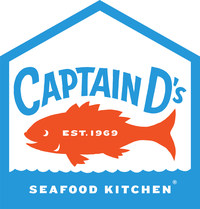 Captain D's, the nation's leading fast-casual seafood restaurant, announced today it has experienced a surge in franchise development throughout 2021, reporting 18 new agreements signed to develop 43 locations in key markets nationwide over the next several years. Half of those agreements are with existing franchisees, whose success continues to be a driving force behind Captain D's accelerated growth. Motivated by impressive AUVs and strong sales comps system-wide, Captain D's franchisees continue to invest in the brand and expand its footprint in their markets, reflecting the viability of its franchise model and attracting new operators to the system.

"Captain D's momentum has been building all year, and as we've celebrated the openings of new restaurants throughout the country, we've also been steadily building our development pipeline to support our aggressive growth goals for years to come," says Brad Reed, chief development officer for Captain D's. "Existing operators representing such a significant portion of our development success this year is a true testament to the confidence they have in this brand and the unit economics. We look forward to continuing to support their growth."

Key states where Captain D's has recently signed multi-unit development agreements with existing franchisees include Florida and Georgia. Wanda Davis and Toks Achebe of Crossroads Portfolio, Inc. opened their first Captain D's in Palatka, Florida, in 2020 and have already signed on to develop two more Florida locations. In Georgia, Anil Dossani will open the first Captain D's Express early next year in Atlanta and has plans to develop two additional Express units in the Atlanta metro area. In addition, he signed on for four more Georgia units this summer.

"The other half of our development growth this year has been with new franchisees," adds Reed. "Many of them are seasoned multi-unit operators who are attracted to our array of flexible prototypes and the way our unique seafood offering complements their existing portfolio. We are thrilled to welcome these new operators into our system, working with them to expand in both familiar and newer markets including Arkansas, Michigan, Florida, Oklahoma, Georgia and Ohio. Captain D's has performed well in new markets and continues to generate a lot of interest from operators looking to expand their portfolio with Captain D's."

Captain D's has continually invested in menu innovation and its vibrant, coastal design to remain true to its core identity – high-quality seafood served at an affordable price in a welcoming atmosphere. Coupled with best-in-class franchisee support, flexible restaurant prototypes and a cost-effective conversion process, the brand is an ideal investment and is consistently recognized among the franchising and foodservice industries' most prestigious accolades. Recent awards in 2021 include Entrepreneur's Top Food Franchises, where Captain D's was once again named the seafood category leader, and Franchise Business Review's Best Franchise Opportunities to Buy.

With more than 540 restaurants in 23 states, Captain D's is the fast-casual seafood leader and number one seafood franchise in America ranked by average unit volume. The company is currently seeking single and multi-unit operators to join in the brand's rapid expansion. For more information about franchise opportunities, visit www.captaindsfranchising.com or call 800-314-4819.

ABOUT CAPTAIN D'SHeadquartered in Nashville, Tenn., Captain D's has more than 540 restaurants in 23 states. Captain D's is the nation's leading fast-casual seafood restaurant and was named the #1 seafood chain in the QSR 50, ranked by AUV. Founded in 1969, Captain D's has been offering its customers high-quality seafood at reasonable prices in a welcoming atmosphere for more than 50 years. Captain D's serves a wide variety of seafood that includes freshly prepared entrees and the company's signature batter-dipped fish. The restaurants also offer premium-quality, grilled items such as shrimp, Tilapia, and Salmon, as well as hushpuppies, desserts, and freshly brewed, Southern-style sweet tea, a Captain D's favorite. For more information, please visit www.captainds.com.

About Franchises for Investors